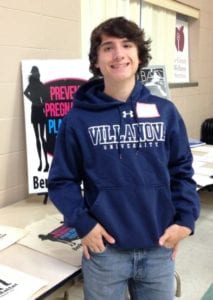 Oftentimes, it’s hard to feel that you can make a difference in life. There are over 7 billion people on our planet; only a select few will become Presidents, billionaires, or celebrities. Subsequently, it’s easy to feel relatively powerless against whatever issue you’re personally concerned with, whether it be poverty, malnutrition, or something else.

But to make a difference, you don’t have to have Benjamins lining your pockets or several million followers listening to your every word. To make a difference, you have to be willing to aggressively attack an issue with others who are similarly invested in improving the issue. It may take loads of hard work, but with enough persistence, anyone can make a big difference in his or her local community.
That’s why I joined Berks Teens Matter in its fight against teen pregnancy. Teen pregnancy is an issue that has plagued Reading in particular for decades, so improving teen pregnancy rates will make our local community a better place to live. More importantly, I want to be able to make a personal difference in someone’s life. If I can have the personal satisfaction that I helped people, no matter the number, escape the cycle of poverty and achieve a better life, I’ll know our work was a success.
I hope this work also has long-term effects on the attitudes within the Berks County community. If people, particularly teenagers, can be inspired by what we do to make a meaningful difference in our local communities, more teenagers will champion other important causes. Although I understand there are many other great Berks County organizations also striving to make a difference, I hope that Berks Teens Matter will get the snowball rolling with teenagers, or at least give it a lot of momentum.
One person can make a difference. United, however, we are capable of achieving more than we can possibly believe. And with Berks Teens Matters, I think that it will be only a matter of time until we get there.
Joe Cullen, Wyomissing High School
Youth Ambassador
Have a question for Joe? Comment below!
Find out how to become a Youth Ambassador