Louise Souders: Advocating for Reproductive Health Rights Since the 1960s 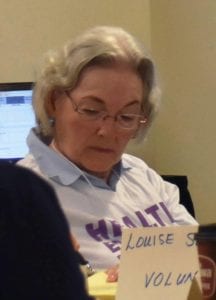 Advocating for Reproductive Health Rights Since the 1960s

Louise Souders is a biologist who was trained in public health as a graduate of Bloomberg Johns Hopkins School of Hygiene and Public Health. Her extensive education in the field and various experiences make her a valued member of our Leadership Committee, where she volunteers to be the minute-taker at each of our monthly meetings.

After obtaining her Master’s Degree and while teaching biology at Memphis State University, Louise worked with several medical professionals as a founder of one of the first family planning clinics in the mid-South in the ‘60s. “I was always involved in some sort of public health project wherever I lived,” recalls Souders, who has done everything from helping a young man develop a publication for end-stage kidney disease patients while living in Illinois to running a clinical trial in a clinic in Chicago and developing an FDA approved-for-marketing gonorrhea screening kit for men. In addition to volunteering at Planned Parenthood while living in San Francisco, Souders teamed up with a physician and three other professionals in the ‘70s to start LINKS, a sexual health resource center for adolescents on the North Shore of Chicago.

She returned to Reading, where she was born and raised, after over 40 years of these various professional jobs. “When I heard about the effort to start a program to reach out to teens in Reading regarding sexual health, my ears perked up, my heart started pounding, and I needed to be involved,” explains Souders.

Now, Souders works with BTM as a way of focusing on “helping the youth of Reading have the educational and medical resources to make wise personal choices that will help them to stay in school, graduate with the knowledge and experience to find jobs that will enable them to become self-sufficient and, when the time is right, enjoy the comfort and challenges of their own family.”

Here is a look at the history of reproduction from an experienced Souders:

There are five fundamental needs for human survival: air, water, food, shelter and reproduction. “It’s that reproduction part that causes humans such anxiety. Humans tend to reach sexual maturity between ages 10 and 13 today.  It might have been more on the 13 years and older in ancient times because nutrition was not as good and survival was more difficult. In theory, people could begin to produce offspring any time after sexual maturity and remember, life expectancy was in the range of 35 years of age during the time of the Roman Empire and teenage pregnancy was the norm.

Now, 2000 or so years later, society has become incredibly complex.  Religion and societal “norms” have placed a complex overlay of rules as to who can do what to/with whom, at what age, with what kind of partner, after what educational accomplishment, and with or without parental consent.  Sexual intimacy is now delayed 5 – 10 years past sexual maturity depending on your culture’s societal expectations.  However, Mother Nature continues to have a very compelling influence on indulging in that urge to reproduce and enjoy the comfort of intimacy.

In ancient times, having many offspring was highly desirable because so many children died young.  However, past the industrial revolution, with employment of sanitation and medicines, survival became much more achievable.  Moving from the agrarian-bartering society to today’s complex cash-dependent society, increased pressure on controlling production of the number of children becomes a driving force to reduce the number of offspring since it becomes so difficult to afford their care.

In the decades before 1960, there were 5 relatively effective methods of birth control: abstinence, condoms, diaphragms, creams and jellies.  With the arrival of the birth control pill and IUDs in the early 1960s, birth control efficacy and efficiency advanced exponentially.  However, all of the societal rules and regulations still had a stranglehold on what females could do with their bodies.

When I finished my Master’s Degree, my husband and I moved to Memphis, Tennessee.  He was a graduate student and doing research at St. Jude’s Children’s Research Hospital, while I taught biology at Memphis State University (now Memphis University).  Shortly after arrival, I saw an article in the newspaper noting that someone at the University of Tennessee Hospital wanted to start a clinic for women who wanted to plan their families.  To the best of my knowledge, there was no Planned Parenthood in the whole Mid-South at the time.  There were several medical professionals and myself who set up a clinic in a neighborhood lacking other medical facilities.  I was in charge of volunteers.  I recruited ladies from the Junior League who volunteered interviewing the patients.  At the time, many men viewed birth control as genocide. Women, however, were desperate to control the number of pregnancies and the children they struggled to feed. Since their male partners were opposed to birth control, they could not have pills, condoms or even creams visible.  Thus, they would insert the creams or jellies in the morning or the night before they were expecting to have sex so their partner would not detect it.  Needless to say, it was not an effective method of contraception.  Most of the clinic’s patients requested IUDs because their partner could not detect it.  This proved to be quite successful for the majority of women.  However, there was one example of its use that has stayed with me forever.

One lady I was working with asked for an IUD so her partner wouldn’t know she was practicing birth control.  We always told the ladies to look on their menstrual pads and in the toilet after use to make certain it didn’t come out during their periods or when going to the bathroom.  This lady came back to the clinic several months after receiving an IUD in tears, certain she was pregnant.  How could it have failed?  I asked her if she had always checked her pads and looked in the toilet.  No – she didn’t have a toilet, she only had an outhouse.  She could never have witnessed its loss!  This is just one of the many struggles these women were living.

While teaching Introductory Biology at Memphis State, I always gave a lecture on human reproduction.  My door was open to students between classes although I was not allowed to be an “advisor” because my husband was a graduate student and the administration didn’t think I would be permanent.  Anyway, students would bring in their sandwiches at noon and we would have spontaneous chats.  I heard many personal stories of misinformation and the need for guidance for responsible attitudes and personal care.

Somehow I heard that there was an apparent need for kids to have a place where they could get sexual health information. I teamed up with a physician and 3 other professionals and started LINKS, a clinic for sexually active adolescents in Northbrook, an up-market community on Chicago’s North Shore. These were not disadvantaged kids.  They came to the clinic most often because they were embarrassed to talk to their parents.  LINKS services were completely free.  Aside from providing information about responsible sexual behavior and contraceptive devices, we gave girls an excuse to say “no”.  Both boys and girls were welcomed in all regards.  We did find, however, how so many of the boys were pushing the girls to “get fixed up” at the clinic so they could have sex.  Some girls, however, were not ready to have sex and we offered them an “out” and gave them one reason or another they could use to tell their boyfriends they were not ready for sex.

So, after 40 some years of various professional jobs, I’ve moved back home to Reading.  I was born in the Reading Hospital.  I lived with my parents above my father’s medical office on doctor’s row at 220 N. 6th Street and went to Elm and Madison grade school through the 3rd grade.  I walked the streets of Reading with my sister or grandmother or parents to shop, go to the movies and various restaurants.  I have witnessed the transition of Reading’s culture shift from an industrial metropolis to a city with many poverty-suffering residents.

As to why I volunteer for Berks Teens Matter – It’s too simple to say it’s because I care about kids.  It’s equally too simple to say that it’s because I care about the social ramification of kids having kids and the mother-kid’s loss of the opportunity to plan her future as her life becomes consumed by child-care and seeking means to support her baby.  I am also incensed that we have gone back to the dark ages of the 1960s when there were too many people with too many punitive nefarious reasons controlling what girls and women can do with their bodies.  I have seen so much misery and felt so much helplessness.